Union Structure and Strategy in Australia and Canada 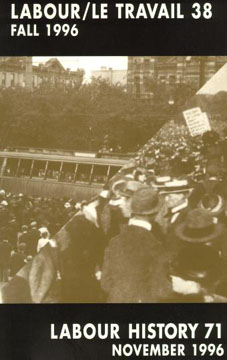 Copyright © 2021 by the Canadian Committee on Labour History. All rights reserved. No part of this work covered by the copyrights hereon may be reproduced or used in any form or by any means — graphic, electronic, or mechanical—without the prior written permission of the publisher. Any request for photocopying, recording, taping, or information storage and retrieval systems of any part of this book shall be directed in writing to the Canadian Reprography Collective, 379 Adelaide Street West, Suite M1, Toronto, Ontario M5V 1S5.

The aim of this paper is to identify and explain the main differences in the structures and strategies of the national union movements in Australia and Canada during the 20th century. Parallel historical narratives reveal that the differences between the two union movements ebbed and waned. They were most similar to each other in the 19th century and after the 1960s, while there was more convincing evidence of divergence in the intermediate period. Following Ross Martin, the explanation offered for these trends emphasises the relationships between unions, political parties and the state. The earlier growth of mass unionism and the political strategies adopted in Australia after their defeats in the 1890s produced more sympathetic state policies (specifically compulsory arbitration from around the turn of the century), which allowed Australian unions to prosper in ways which Canadian unions did not begin to enjoy until the 1940s. At the same time, differences in the types of state policies in the two countries subsequently affected both the structure of unions, Canadian unions being more fragmented at national level than their Australian counterparts, and the strategies they employed, Canadian unions relying more on decentralized collective bargaining compared to the more centralized arbitration approach of Australian unions.
PDF