"A Link Between Labour and Learning": The Workers Educational Association in Ontario, 1917-1951 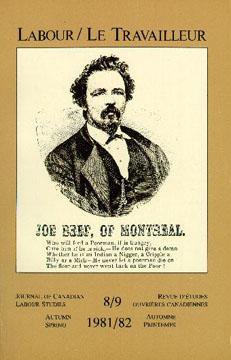 Copyright © 2022 by the Canadian Committee on Labour History. All rights reserved. No part of this work covered by the copyrights hereon may be reproduced or used in any form or by any means — graphic, electronic, or mechanical—without the prior written permission of the publisher. Any request for photocopying, recording, taping, or information storage and retrieval systems of any part of this book shall be directed in writing to the Canadian Reprography Collective, 379 Adelaide Street West, Suite M1, Toronto, Ontario M5V 1S5.

This paper traces the rise and fall in Ontario of the Workers Educational Association (WEA), a voluntary association whose main purpose was to organize inexpensive, non-credit night classes taught by university professors for the working class. The Association was an offshoot of the British WEA. ln Ontario the main impetus for establishing an Association in 1918 came from members of Toronto's intellectual elite. One of their aims was to teach labour people "responsible behaviour" at a time when the labour movement seemed to be gaining influence and becoming more radical. Working-class people within the WEA proved less malleable than the academics had hoped, and the Association soon became a workers' organization, largely controlled by some of its working-class members. It offered many liberal arts courses and, in the late 1930s and 1940s, developed innovative labour education and research programmes which proved of lasting benefit to the labour movement. Although continually threatened by the University of Toronto administration, the WEA failed in the 1950s because certain labour leaders, using Cold War tactics, opposed a labour educational institution that they could not control. Aucune résumé disponible.
PDF